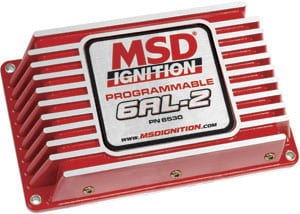 This ignition controller is universal

The new ignition, Part Number 6530, is based on the same output as the 6AL-2, but rather than rotary dials for rpm adjustments it sports a serial port that connects to a PC. Once you load MSD’s Windows based software on your PC, you’re ready to start mapping and programming. To start, you can get rid of the weights and springs that control the mechanical advance of your distributor. Go ahead and lock it out because you can now create a timing curve that allows you to manipulate the timing down to tenth of a degree increments every 100 rpm. The advantage is precise timing control, with the ability to ramp the timing in or retard it at exactly the rpm that you want it to move. Want more timing out for a start retard? Simply click the mouse and move a couple dots in position. Like a high speed retard? Clickity-click!

Another great feature is for the forced induction fans. The ignition features a timing curve based on boost so you can map out a timing curve based on boost pressure. The feature that most street guys will dig is the ability to pull timing out during the holeshot – and ramp it back in. Since many cars have more power than traction capabilities, being able to soften the power at the holeshot can help reduce the tire shredding off the line.

There are also three different rpm limits that can be set in 100-rpm increments; one for the burnout, one for the holeshot and of course a top end limit for overrev protection. If you have a nitrous shot you like to blast off now and then, the ignition has an activation wire that you tie into the nitrous wiring. When the nitrous is activate, the timing can be retarded instantly!