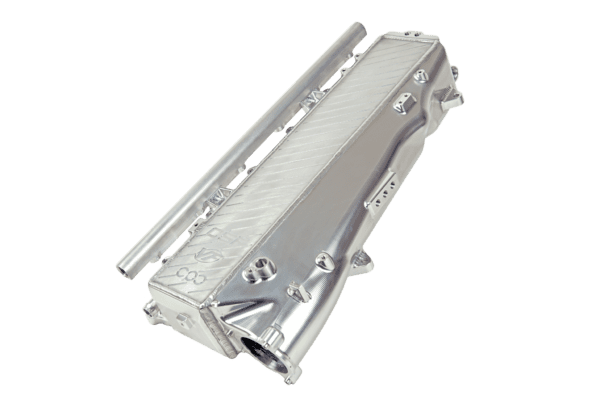 With well over 1,500 hours of design, prototype development, machining, and testing, CSF, along with partners VF Engineering (USA) and Custom Plenum Creations (Australia), has now brought a state-of-the-art CNC machined, high-performance Charge-Air Cooler Manifold to the B58 platform for Mk5 Supra and BMW models. This product solves what has been commonly known as a weak link of an otherwise impressive new engine platform.

With the larger and more efficient water-to-air intercooler performance, lower pressure drop across the system, included fuel rail, kit for top feed port injection, and several other industry-leading features, the CSF Super Manifold will allow B58 owners to maximize the performance of their vehicles and push the limits further than what has been previously possible with this new platform.

The OEM water-cooled charge air cooler intake manifold for the B58 engine is adequate in cars with little or no modifications, but starts to really show an apparent weakness in cars that have bolt-on modifications, turbo upgrades, increased fueling (such as port injection), and performance tuning. Also, the OEM intercooler system has been known to suffer from heat soak in demanding racing conditions such as time attack, endurance racing, drag racing, and drifting, as well as spirited driving on the street. This can cause the car to pull timing out of the engine due to high intake air temperatures (IATs), and then can cause “limp mode” once temperatures reach a certain threshold, as the vehicle’s ECU will cut power to protect the engine

Included in the supplied hardware kit is several brackets, bolts, washers, and mounting posts to be able to install the OEM and OEM-style engine covers. This is an industry-exclusive feature to the CSF x VF Engineering design, and was extremely difficult to not only engineer, but to manufacture as well. An array of items come vacuum packaged with corresponding letters listed on an easy to use Bill-of-Materials List (BOM) along with exploded diagrams and a simple order of operation procedure list to follow for installation. Made with racers and DIY enthusiasts in mind.

Custom Color Options, From the Leader in BMW Cooling Customization

CSF has become the industry leader and innovator of custom finished cooling products. We first started with our most popular BMW S55 Charge-Air Cooler, then expanded to other BMW models such as our F1X M5/M6 and our latest F9X M5/M8 Charge-Air Cooler systems. Most of the same custom finishes can be ordered on CSF’s new B58 “Super Manifold.”